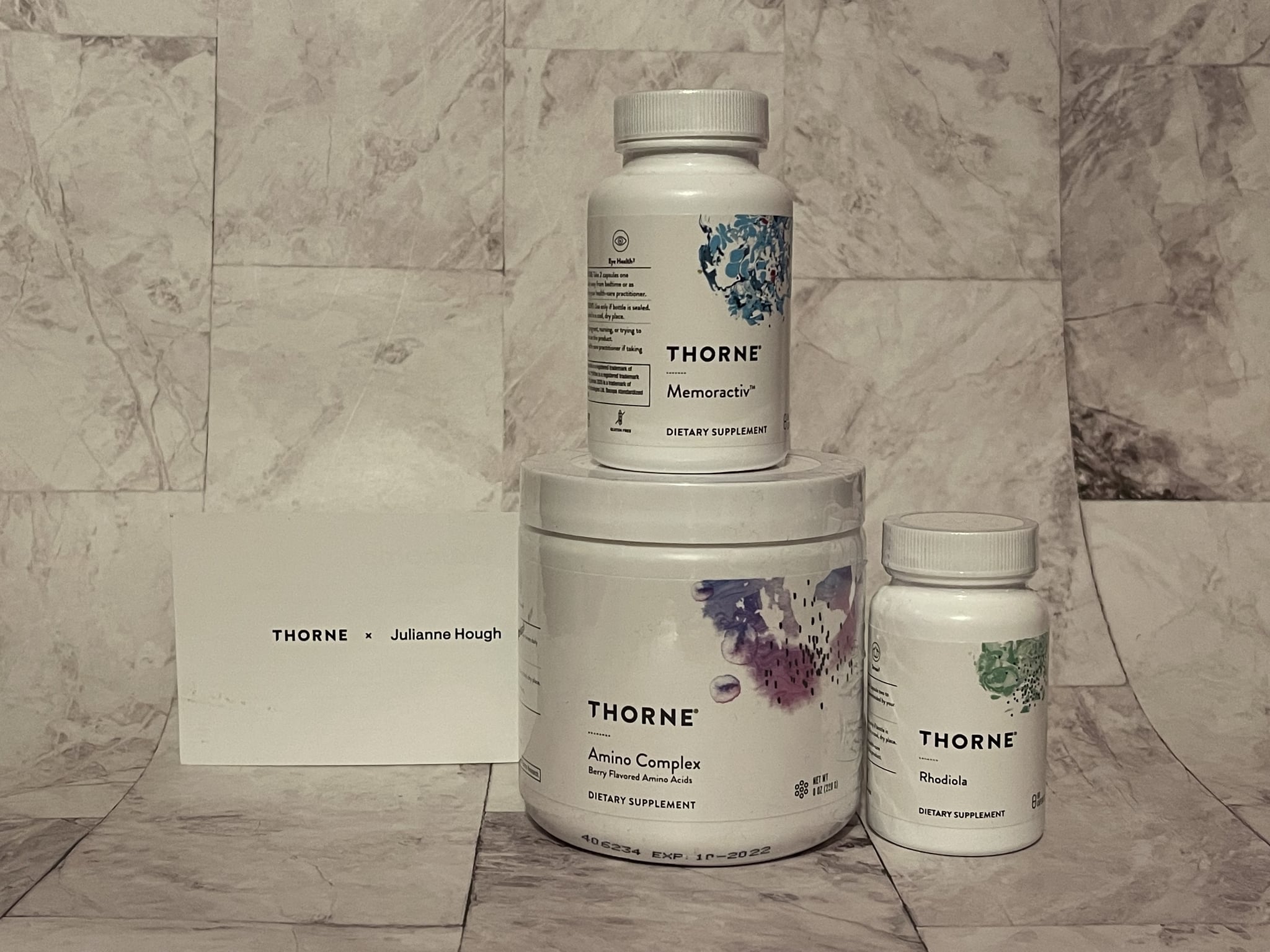 Supplements are a an essential part of my daily wellness routine, but sometimes I wonder if they’re actually doing what they say they’ll do on the box. After getting an invitation to take a Thorne x KINRGY class with Julianne Hough, I saw it as a great opportunity to see if these Thorne supplements will actually have an impact on my workout.

Upon landing on its website, I saw that Thorne is a brand passionate about “personal, scientific wellness.” There are more than 100 products, and Thorne offers nearly a dozen health tests, so I can see that the company would want its customers to have a tailored supplement experience. The supplements sent to me days before the class were Memoractiv, Amino Complex, and Rhodiola, all of which are a part of the Thorne x Julianne Hough Bundle, meaning Hough selected each of the supplements to be in her bundle to pair with her KINRGY class. KINRGY is a class, community, and experience rooted in energy. So as Hough said, “KINRGY, energy” make a great pair in terms of collaborating on a bundle.

What Are the Supplements in Hough’s Bundle, and What Are They Supposed to Do?

Upon receiving the Thorne x Julianne Hough supplements, I went through their claims, which Thorne clarified have not been evaluated by the FDA. According to Thorne’s promotional materials, the Memoractiv capsules intend to support creativity, productivity, and focus. The Amino Complex intends to help maintain steady energy levels while supporting muscle function. The Rhodiola capsules claim to relieve stress and support mental focus and sleep. Additionally, it’s important to note that none of these products are meant to treat or cure any diseases. If you’re unsure if you should be taking any of these supplements, please speak with your medical provider.

Why Does Hough Take These Supplements?

In a Q&A with Hough, she spoke a bit about why she uses each of these supplements and what made her add them to her bundle. Hough said that “Memoractiv keeps [her] super focused and creative.” The Amino Complex gives her “energy to power through her workouts” while “reducing her muscle soreness” the day after her workout, and Rhodiola “helps [her] manage daily stresses of life. . . and helps [her] sleep.”

The KINRGY class is all about activating the energy within ourselves. From the top of practice, we were asked to rub our hands together vigorously in order to “activate our life force energy,” also known as Qi. To feel that energy all over, we then rubbed our entire bodies. While we were rubbing, I noticed the cinematic music in the background. As the sound crescendoed, I realized that the style of music made it feel as if we were in our own big-screen film; think: Pixar. Once the rubbing was done, we swayed until a strong feminine voice said, “Earth.”

We stood firm in a wide stance with toes slightly turned out and began to breathe along the vertical column of our bodies. On the inhale, our elbows were in by our sides clenched in fists, legs long. On the exhale, the backs of our hands grazed the tops of our thighs as we glided into a deep squat. As we took this motion breathing in through the nose, out through the mouth, I felt like we were charging up for the workout. Not sure if the Amino Complex was assisting in this energizing feeling, but I felt a boost of energy in my center column of my torso throughout this breathing exercise.

In a way, the movement brought back a sense of nostalgia from my dance major track in undergrad, as it reminded me of the contraction and release from The Graham Method. We then shifted from focusing on breathing to getting low to the ground. At one point, Hough told us to “slap the earth.” Once we were done exploring the grounding earth movement, it was time to bring the heat with fire.

With the shift to the first “fire” portion of class came a shift in our breath technique. We began to breathe in and out of the nose almost in a Kapalabhati pranayama kind of way. As the speed of our breath picked up, we held our hands in front of our chests facing outward and pumped three times, two times with hands forward and once with our hands down toward the floor. As we were pumping hands, we simultaneously thrusted our hips. This movement, for me, was reminiscent of a variety of West African dances I’ve done in the past. We didn’t spend too much time pumping before the mystical voice said, “Water.”

Along with the fluid-sounding music, we switched back to breathing in through the nose, out through the mouth. As we swayed through most of the water section, we ended up waving our entire body to “unblock the creativity center.” Continuing that theme of unblocking, we briefly returned to the pumping, fiery movement until the voice of the soundtrack said, “Air.”

Especially after the second round of fire, hearing air made me audibly exhale louder than I had all class. With this shift to air, we were instructed to breathe in and out of the mouth. Personally, after a few rounds of this style of breathing, I switched back to breathing in through the nose, out through the mouth since it didn’t feel safe for me to breathe that way. While we were breathing, there was a cinematic climax in the orchestral music with undulating crescendos and decrescendos, alternating strings with piano trills. Hough spent this climactic moment sharing encouraging words to the class related to the idea of “giving and receiving kindness and energy” as one of life’s purposes.

We then closed the “20 minutes of pure vibration and energy” with a celebration of gratitude through movement, as “this could be the best day of our lives” was just one of several inspirational lyrics playing that could be heard in the now pop-sounding music.

Post-Workout Thoughts: Did the Thorne Supplements Do Anything?

After the 20-minute energetic KINRGY workout, I felt like I usually do post class: sweaty. OK, but in terms of how I believed the supplements performed in relationship to their claims, I was pleasantly surprised by the Memoractiv. Usually after working out, I feel somewhat energized throughout my day and sleep better at night, so I don’t feel that the Amino Complex or Rhodiola did much for me.

However, I did notice that I was blazing through projects with a bit more ease, so I think Memoractiv was doing something for me. To confirm this for myself, I stopped taking it for a couple of days, then went back on it. From that mini experiment, I noticed that I was able to knock out my to-do lists more efficiently. Now, I must say, it could very well be having a placebo effect, or it could actually be working. Since I have most of a bottle left, I’m definitely going to keep taking Memoractiv while I have it.