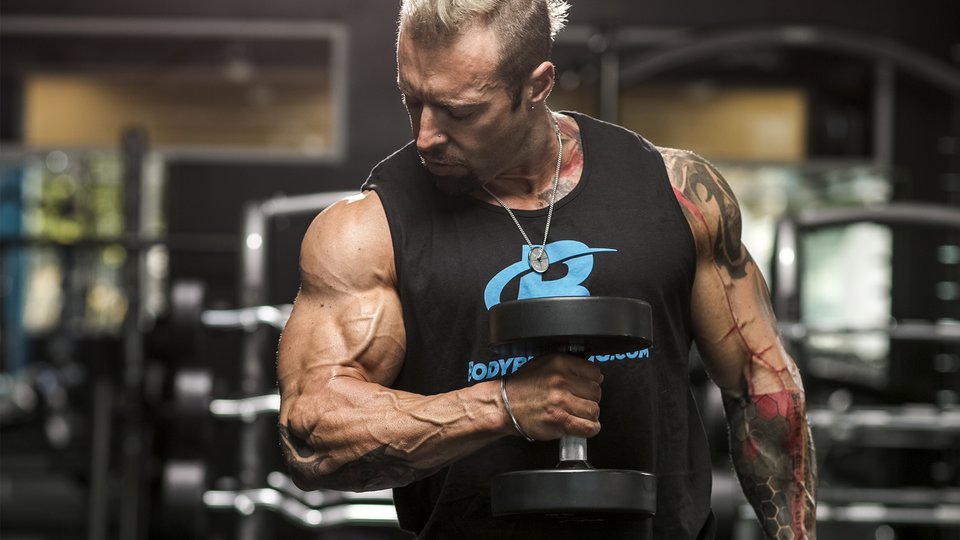 If you’ve been training consistently for at least a couple of years, there has probably been a time when you came up against some kind of plateau. You’re in the gym regularly, hitting it five days a week, never missing a meal, and taking the right supplements, but the scale and the mirror just aren’t cooperating like they used to.

When this happens, you need to start thinking outside of the box—or more specifically, outside of the same-old sets and reps. This is the time when it’s perfect to start using the advanced training principles that bodybuilders have been using for decades, and that I’ve been using myself for the last 20 years to continue to evolve and grow.

These are my four go-to intensity boosters. If they have a unifying theme, it’s shortening rest periods, hitting high repetitions instead of low reps, and taking my body—and yours—out of the comfort zone.

You can find all four of these techniques throughout my most popular training programs, such as “Kris Gethin’s 12-Week Muscle-Building Trainer” and the “8-Week Hardcore Trainer,” or you can test them out for yourself in your workouts.

Dropsets are the ultimate “simple on paper, hard in action” technique. When you hit failure at, say, 12-15 repetitions on a move like the cable biceps curl, you simply lighten the weight a couple of plates and bust out another 5-6 reps, which should take you to failure again. You could stop there, or you could make another drop for another 5-6 reps, which would be a double dropset.

By the end of that second drop, your biceps should be screaming. You’ll hit both your fast-twitch and slow-twitch fibers, push plenty of blood into the muscle, and do enough damage to force your body to respond by growing.

There’s nothing like giant sets to give lagging muscle groups an unmistakable message to grow. Legs in particular can benefit from this brutality, because they’re made of large muscles, but they’re also a serious weakness in a lot of bodybuilders. Too many lifters focus on their upper bodies and neglect their legs, or sleepwalk through their lower-body training. Giant sets will help you turn this weakness into a weapon.

Giant sets are simply three or more exercises in a row, with little to no rest between. And I’m not just talking three isolation moves like leg extensions, leg curls, and calf raises. No, my favorite giant sets for legs are built around high reps of compound exercises, and they look more like this:

Triset: Up to 5 sets

Don’t go to failure on these sets. This should be hard, but I want you to be able to hit every rep, push a massive amount of blood into the legs, recover for a couple of minutes, and then be able do it again.

This sort of setup is tough on the legs, but also on the lungs. It’s one reason why I think it’s essential that bodybuilders do some form of cardio daily. If not, you’ll end up on the floor at the end of the first round.

When you reach failure on a set—let’s pick biceps curls again—you have a few options. You can stop, of course. And that’s good enough for a while, but eventually, it’ll limit your progress. You can cheat a weight up, which is less than ideal, because the biceps will disengage as you hoist the weight up with your back. Or, you can have a partner help you through a forced rep. This is my favorite way to keep a set moving when otherwise it would grind to a halt.

Don’t let the word “forced” fool you; the partner will only be giving you the slightest assist through the most difficult part of the rep. You’ll still be doing most of the work.

These work particularly well with biceps curls, but can be done for plenty of other movements. Just 4-5 forced reps at the end of a set after you hit failure is plenty. Any more than that, and your spotter is going to be doing all the work.

There are different variations of supersets for all parts of the body. You can hit antagonist muscle groups, like biceps and triceps, noncompeting muscle groups, or crush the same muscle group with two movements back-to-back. When the goal is to bring up a muscle group that is refusing to grow, I like the third option.

More specifically, I like to do an isolation movement, such as a triceps extension variation, followed by a multijoint exercise, such as a close-grip push-up.

Why that order? Because when you do a close-grip push-up, other muscle groups like the shoulders and chest inevitably help out. This means you can go all the way to failure on the triceps isolation move first, but then accentuate that failure by getting some more quality reps and burn out even more muscle tissue.

The goal here is pain, not comfort, so seek failure and drown that muscle in lactic acid!